I just posted on Twitter a few minutes ago: “I feel like I should blog something, but too many topics floating around in my head. It’s not writer’s block. It’s more writer’s diarrhea.”  And it was at that moment the absolute God’s honest truth.

Then I got the most awesome non-tangible birthday present ever (I say non-tangible because when I said it was absolutely unbeatable, someone offered me the winning lottery ticket.  Okay, yeah.  So THAT might top it.  MAYBE.) and, well, there’s really kind of a backstory.

I’m a nerd, we’re all clear on this, right?  If you went to high school with me, you remember my Murphy Brown days.  And that dark period of my life that was my Days of Our Lives phase (otherwise known as I was in college and my brain couldn’t take anything that actually made me think).  Then came X-Files. 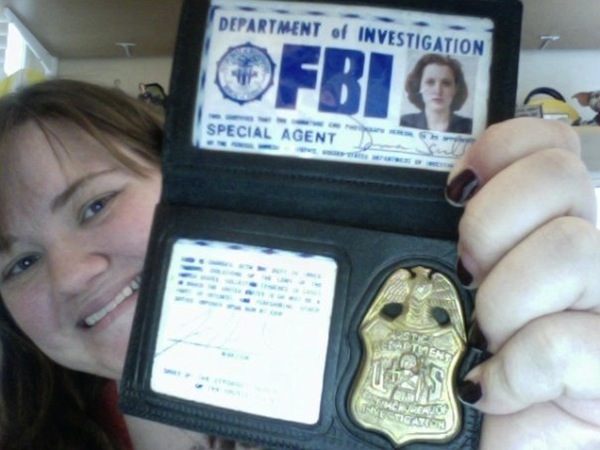 Yes, that is Scully’s ACTUAL badge. And my sorryass manicure.

I got a Rolling Stone cover. 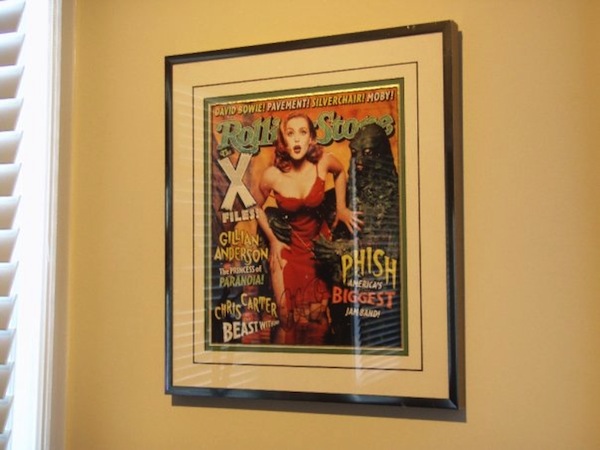 The Infamous Rolling Stone. It hung in Gillian’s London office until I bought it in an auction in July of ’08.

So it’s hard to tell from that picture, but that Rolling Stone cover, well, it has its own story to tell. It hung in Gillian Anderson‘s office in London for a while before I won it. She was supposed to autograph it and have it sent to me. The whole time, I’m yelling (via email with The Greatest E of All from the auction house) “AIRMAIL! NO BOATS! AIRMAIL! DO NOT PUT IT ON A BOAT!!” because I know how boats can be. A couple of months later, the Rolling Stone had gone AWOL.

It was finally found in December in port in South Carolina. And the glass was smashed. So back to London it went before it ever even got to me. Gillian autographed the cover (she’d signed the glass originally). It was reglassed. Her assistant, rather than post it over The Pond again, brought it to the states on a plane and shipped it to me. In, oh, late February/early March. And I raced from my office and met the FedEx guy halfway across the lawn to get it. Raced inside and carefully opened it.

The glass had broken. OF COURSE the cover itself was scratched to bits. And OH HAI, Gillian had autographed it OVER SCRATCHES.

Now I’d been laughing my ass off through this whole thing because it had just been a saga. I can’t count how many emails had been exchanged. And while most people would have boiled when they saw the scratches, I still tried to keep laughing because, hey, it has a story with it, right? And I’m a sucker for a good story.

TechPapa comes down and sees the cover. Sees me frantically emailing with The Greatest E of All, and says, knowing the whole story, “Stop being such a thorn in the woman’s side! You know, she ought to send you a cover that’s not scratched and autograph it, ‘To Susan, I hope you’re fucking happy now! – Gillian.'” And again, I was laughing because, great. Somewhere Gillian Anderson probably knows my name and is burning me in effigy. NICE.

We’d decided we’d wanted to go to London in the summer of ’09, so I emailed The Greatest E of All and said (and I’m paraphrasing and skipping the whining and begging), “You know, I’ll take a couple of tickets to A Doll’s House.” Because Gillian was playing Nora in “A Doll’s House” on The West End (be still my theatre nut heart) that summer, and the show had sold out months ago.  TechPapa had even tried to get me tickets as a surprise, but alas.

It goes on a while. Couple of weeks, maybe. The Greatest E of All put up with a lot of bad, sad jokes from me trying to a) keep things loose and b) not come across as one of Those Fans, which I’m almost positive I did (and still do) anyway. And I get a yes on tickets. Oddly on the same day I’d managed to snag a pair of tickets for myself a couple of days earlier when Donmar Warehouse had released a few, but AWESOME! I was getting tickets from Gillian Anderson! Sweet!

So what do I do with extra tickets? I invite FRIENDS!! 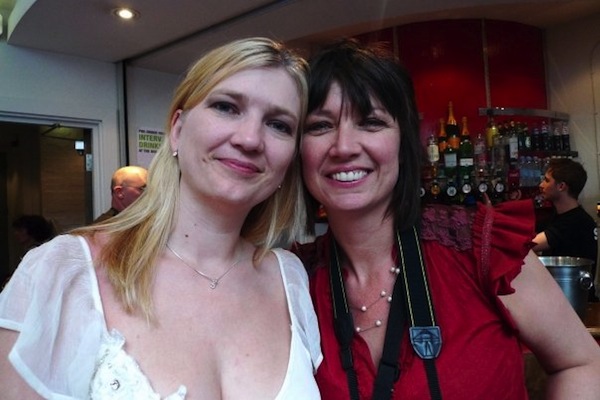 The Kiwi, a longtime dear friend who lives not too far from London, and her gal Stella, who simply rocks.

Well, Tuesday in London, I went to Will Call to get the tickets. They weren’t there. The guy told me tickets from cast aren’t usually up until the day of. WONDERFUL. I started getting nervous. I was frantically messaging The Greatest E of All who had taken the week off of work (bitch!), tired of the whole rigamarole, and not answering. Yay!  My plan to alienate the entire planet with my overbearingness is working!

On the 17th, Wednesday, The Kiwi and Stella came down. We did dinner. We walked to the theatre. Everybody was ready for me to turn into SuperBitch if the tickets weren’t there. I went in a little on edge because I was almost sure they wouldn’t be there, even after The Greatest E of All got confirmation last week that they would.  Because that’s just how things happen to me.  Isn’t that how we got here in the first place?

“Hi, I’m supposed to have a couple of tickets to pick up. Susan M…”

Ticket Guy nodded before I was even done, handed me the tickets.

Woah. It was almost too easy. Suddenly Stella, who was in a friggen Pink Floyd cover band at the time, thinks I’m a rockstar. TechPapa’s astonished.

I have to admit, I was an eensy bit disappointed there wasn’t a backstage pass (TGEoA had tried, without me asking), but c’est la vie, right?

I handed my tickets to Rach and Stella, and TechPapa and I took off to find our seats.  Second row, stalls, on the corner, no one in front of us. SWEET!  I mean, they’re GILLIAN’S seats so it’s not like they’re going to suck, but still.  They were awesome.

The play was fantastic and, by some insane miracle, even TechPapa enjoyed it. I decided at intermission that, okay, maybe I’d buck through the nerves, be nice, catch her at the stage door, and say thank you for the tickets. It would be cool to have her sign my ticket anyway, no?

I nearly changed my mind when, as she was leaving from the final curtain call, Gillian made eye contact with me. Shiiiiit, I thought. She knows!

Ah well. Heck with it.

As we waited in line in the lobby, the rest of the cast kinda wandered by, but everybody knows the line is for Gillian because X-Files fans can be scary like that (the rest of the line was for Christopher Eccleston of “Dr. Who” fame, but he slipped out the back). Now, really, I’m a fan, but I’ve never considered myself a CRAZY fan. And, honestly, and I know people will deny this, I was not all that atwitter about the whole thing. I was more anxious about seeing The Kiwi for the first time in 8 years. I was excited to see the play, yes, but I wasn’t squealing or in utter jawdropping awe or anything.

All that to say there was a good contingent of the…um…crazier crowd present and accounted for. I *so* didn’t want to be lumped with them.

Gillian cane down and starts signing autographs, kinda zipping through the first few people in line. Everybody, every single person, asked for a picture and she’d say, “I’m sorry. I really can’t do that for anybody.  If I make one exception, I have to do it for everyone.”  Over and over.

Then she got to me.

I handed her the ticket to sign and say, quietly because I’ve tried SO hard to be good and not advertise that I got those tickets from her, “Thank you for the tickets. The seats and the show were wonderful.”

She pulled back and looked at me and said in this big voice, “SECURITY!”

No. Actually, she pulled back, looked at me, and said quite loudly, “That’s you!! YOU’RE the one with the…the…” And I nodded like a stunned dork and she launched into this huge apology. “I’m *SO* so sorry about that, but I’m so glad you got to come and I’m so sorry and that was just awful and….”

So at this point, my husband, funny man that he is, piped up and said, “Yeah, I told her you should send her a new cover signed, ‘Hope you’re fucking happy now.'” And we all laughed. And Gillian grabbed my program and DID JUST THAT.

Except as she was writing she glanced up. “It’s Susan, right?”

(As she personalized it) “Miller, right?”

As I CRAWLED OUT OF THE THEATRE. 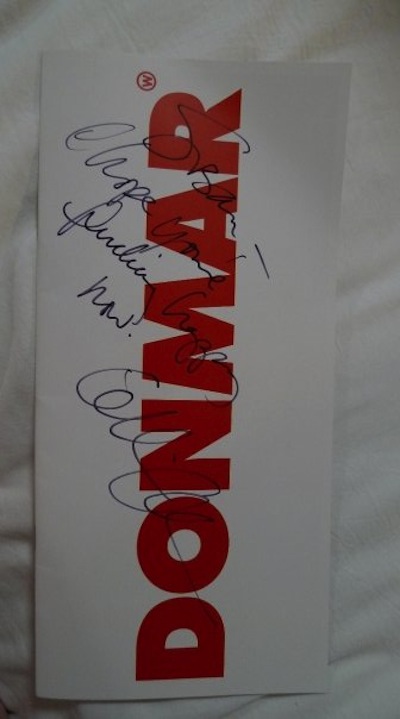 It now hangs in my office with a colorform block over the expletive to placate my mother.

Fine. She knows my name. Figuring she was probably pushing her security alert button, so I decided to go for the gold.

I handed TechPapa the camera, which he has NEVER used and which you have to manually pop up the flash (which he didn’t do), and he snapped the picture.

It came out a bit dark, but let me just tell you, I really don’t care. 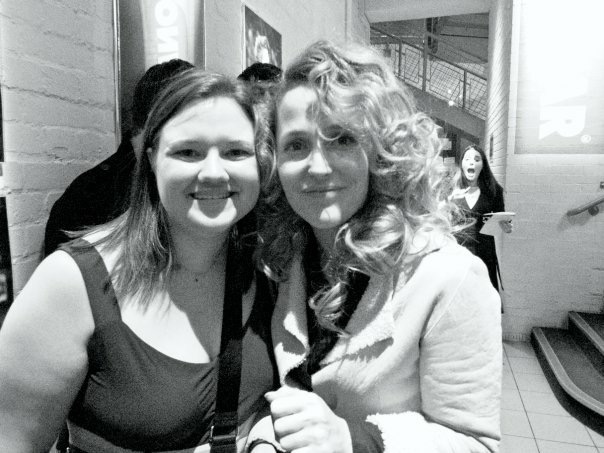 She actually doesn’t do pictures at ALL during the stage door. Color me either a) infamous, b) really insanely annoying, or c) lucky. Or, you know, a bit of all three.

Is it just me or does the girl in the background not just MAKE that whole picture?

After spending far too long with me for the line she was facing, Gillian finished with me and started out of the theatre. I could hear the crazier crowd asking for photos (“But SHE got one!”) to which Gillian repeated several times, “I know, but you don’t understand. That one was special. It…it’s a long story.”

So how does all of this tie into The Most Awesome Birthday Present Ever?

I have a new follower on Twitter.  And got a Happy Birthday DM.  Yeah, Gillian Anderson has just resealed her position at the top of my list of People Filled with Awesomesauce.

« Jupotatofootballdixie
The Raptor is an Automatic. Thank God. »